We are excited to announce that we have partnered with Great Lakes Theater (GLT) to create an interactive fundraising kiosk that will be placed in the lobby of the Ohio Theatre at Playhouse Square during GLT’s run of "A Christmas Carol" November 25 through December 23.

The 3’ x 8’ kiosk is designed as an engaging replacement for the traditional “donation box”. Dubbed “The Humbug Machine,” the kiosk features life-size video footage of the classic holiday curmudgeon Scrooge enticing audience members to make a donation to support arts education programming for students via an attached bill collector. When a bill is inserted, Scrooge acknowledges the bill denomination and responds with a variety of in-character antics, from comical to outrageous. The machine accepts cash in the form of $1, $5, $10, and $20 bills. Patrons are encouraged to share photos of their kiosk experience on social media using the hashtag #HumbugMachine. 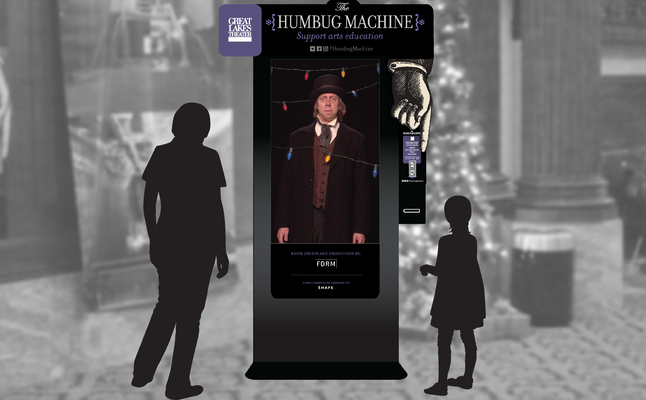 “We’ve been developing new ways to use technology and interactive on-site experiences to engage donors,” says our Principal and CTO, Steve Cencula. “‘The Humbug Machine’ is a perfect application of this idea; we had a location with lots of foot traffic and adoring fans, a world-class actor, and a production starring Scrooge – whose name is synonymous with money and giving. Great Lakes Theater’s enthusiasm and collaboration allowed us to put together a charming experience, and we think kids and parents will love it.”

We at FORM are committed to discovering leading-edge ways to create meaningful cultural experiences through the integration of technology. At the time of release, this is the only known example of this type of technology at a nonprofit performing arts venue in the United States.

Donations received through the kiosk will benefit Great Lakes Theater’s education programming which positively impacts the lives of over 50,000 students annually.

"When we first approached our longtime design partners at FORM and asked their exceptional creative team to conceive an imaginative, forward-looking and fun new way to engage A Christmas Carol audience members in our lobby and encourage donation support, we knew that they would come up with something surprising and amazing… as they always do," said Todd Krispinsky, Director of Institutional Advancement for Great Lakes Theater. FORM developed the concept for "The 'Humbug Machine', and worked with with the awesome video team at SHAPE for the footage. The end result exceeded our expectations in every way. We look forward to investing the donations that result from this engaging new technology to benefit northeast Ohio’s students.”

Free Webinar: The Science of Giving